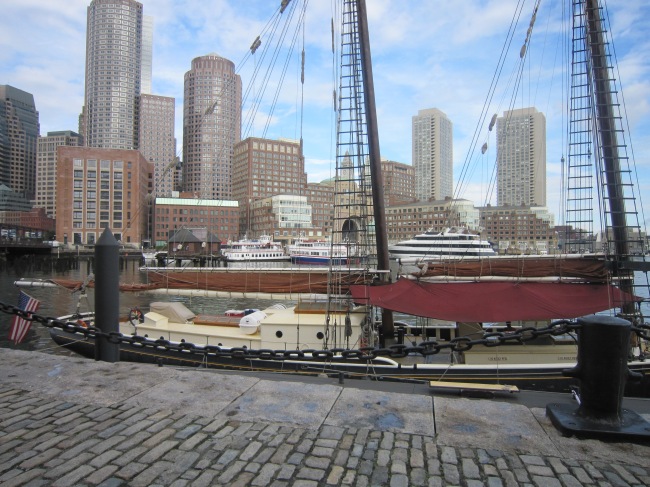 Lost on the Boston Harbour Walk

Blissfully aware that it was Friday the 13th and that this was, in ancient times, a power day for women (was it guys, d’you think that spread the rumour of bad luck?) , I selected my route to the Museum of Fine Arts from Aquarium via the Boston harbour walk.  It was my second day in town, and I was thirsting for art.  I’d managed to shake off the bad taste left by the girl in Urban Outfitters the day before:  “CLOSE THE DOOR.”  I did an about turn and, morphing into a snotty Englishwoman snapped “the phrase is PLEASE close the door.”  I guess the heat got to us both.

The harbour walk is intriguing; who owns these fancy boats?  Do they fret over never finding enough time to spend on them like people with holiday homes?  Or is it just one way to splash out their zillions so it doesn’t pile up too much.  Do they wake thinking ‘there’s nothing I really need or want today’ or do they wonder what happiness-trinket they can buy?  There aren’t so many Bill and Melinda’s, I fear.  Boats like these must cost a packet just to park up.  Then there’s the staff, the gold taps, scrubbing brushes for the decks, bikini clad lovelies etc let alone the cost of actually going somewhere.   Still, it’s better than hoarding your pee in jars , or leaving your toenails unclipped and curling like a goat’s Howard. 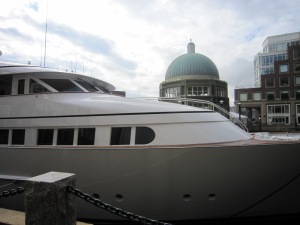 I got lost.  I always do.  Some people plan their journeys scrupulously.  I wing it.  Somehow I managed to turn “no problem getting to MoFA, just follow the Harbour Walk and there you are” to a hot and bothered realization that if that were true I should have found it an hour ago.  Sometimes you want to climb up a hill to see where you are, especially among the skyscrapers.  It’s amazing how many Bostonians don’t have a clue where their best asset is.  When I did finally arrive, and saw the size of the museum I immediately regretted my strategy.  I didn’t need a day, I needed a week.  More organised people would have catalogued the art they saw in a little notebook, and be far more informative.  I have to apologise.  All I can do is show you pictures of some of my favourite pieces of art, and hope it inspires you to go to this aptly named museum.

My appetite had been whetted by adverts all around town for the ‘Hippy Chic ‘exhibition currently showing.  I have hippy credentials, but you know how they say ‘if you remember the 60s you obviously weren’t there?’ That doesn’t really apply to me.  I remember them well.  I did my best to conform with the non-conformity, I even inhaled, but only socially, like I might share a bottle of wine with friends now.  It wasn’t a lifestyle choice to live in a fug  of marijuana and procrastination.  I had too many nappies (diapers) to change.  I had my first baby when I was 23, and like to think I was a responsible mother.  I breastfed, but only till they were about 6 months old, not until they could toddle up and ask for it before they went to school.  I thought at one time it would be interesting to try LSD, but only if a responsible person would mind the children for 4 days.  I couldn’t find one.  Then I looked up the effects of LSD in one of my father’s medical books and found it produced a so-called ‘pink spot’ in urine just like they find in schizophrenics. That was enough to put me off.  I don’t suppose a real hippy would have been.  However, it does mean any comments I make about the exhibition are from someone who had a clear perception at the time.  Now, honestly, did any of the people you know look like this? 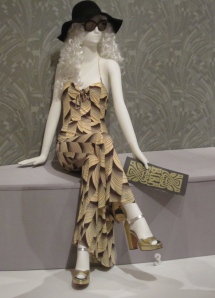 See the bag she’s holding?  That’s Biba.  I still have my Biba dress, it’s somewhere in the attic in the grandchildren’s dressing up box.  It was a floor length purple sleeveless vest (that’s an English vest, not American) and it came from the original  shop round the back of High Street Kensington (someone’s front room fitted out with old fashioned wooden hat stands).  It cost eighteen shillings, which at the time was just under a pound.  I wore it bra-less, though I only just fitted the criteria we used then: if you can hold a pencil under your breast without it falling down you are not pert enough to go bra-less.  This dress is very lovely, but it wasn’t on the streets of Gloucester at the time, or even the London  I remember.

Look at the hair on these guys.  All the models in the exhibition had white hair.  Maybe they were appealing to those of us who were hippies at the time, and like me are snow white now – but it wasn’t what we looked like then and the image jars.  Hippies had natural coloured hair or hennaed hair.  Even the bleaching was from hanging out in the sun in parks or the first free festivals getting stoned.  Hair dyes weren’t available like they are now. 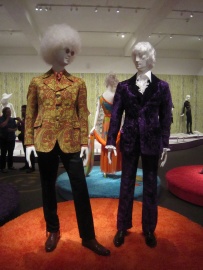 Well, almost unavailable.  Old ladies went in for purple or pink rinses on their  permed grey hair in those days.  Most didn’t even wash their own hair.  They would go for a shampoo and a set to the hairdressers once a week.  (What happy days those must have been for hairdressers.) It would be set like concrete, stiff with spray, just like a pan cleaner with a faint hint of mauve or pink.  Hippies let it all hang out.  We didn’t use hairdressers.  A few went in for frizzy afros, but the rest of us just grew it.  However, I went through a phase of mixing undiluted purple and pink rinse and achieving a maroon streak in my tangle of sun bleached mousey hair.  Being at a ballet school, with access to stage make up I also went in for green eyebrows and lashes.  I used a tin of Caron D’Ash pastel crayons to improvise wild eyeshadow.  Come to think of it, I was way ahead of my time.  I dyed  Aunty Mamie’s old silk stockings magenta and green.  In winter I wore a long white crochet version of an Afgan coat (all the rage) and a tiny shetland jumper that just covered my breasts and left my midriff bare to my low slung loons even when it was way below freezing.  Hippies I knew improvised, but maybe I just mixed in the wrong circles.   I don’t remember smart hippies like these.

These were some of my favourite paintings and sculptures

Someone having a very bad day