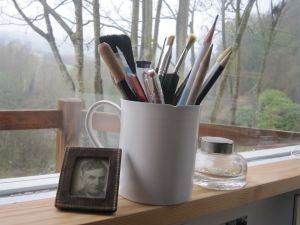 “Ha”, you might well ask, “you felt uncomfortable,  what about the model?”

New year, new you.  It’s the January mantra isn’t it?   This year, with us boomers defying our dodgy knees and wrinkles, the mantra was elaborated with a promise to halt mental decline by trying something new.  At our age wandering into a room and thinking “now why did I come in here?” is a little bit scary (not that it isn’t something I’ve done for, I don’t know, years…)  so I decided to fill the yawning gap left in my life by the folding of my much loved calligraphy class with something completely different.

The leaflet wasn’t particularly specific.  What was ‘extreme’ life drawing? I’d heard rumours, I’d seen the straps at a recent exhibition held in the studio. I called the teacher.

“I hear you hang your models from the ceiling?  Won’t that be a bit advanced for me?”

Apart from an inspiring afternoon in Cricklade with their art group in November it had been 50 years since I did any life drawing. I wasn’t convinced. Wouldn’t I be running before I could toddle?

“There’ll be other beginners,” said Paul.

“Can’t I just try a session and see?”

Some people have the knack of entering a room gracefully whatever the circumstances.  I’m not one of them.  With my board slung under one arm, art kit in the other hand, bundled up against the sou-westerly monsoon raging outside, I clattered my way in.  Having politely stepped back to let other students lead the way in, I found all the best places bagged.  Not that there really is a ‘best place’ when you’re life drawing, it somehow always feels like that.  It’s like choosing in a restaurant and then preferring the other person’s platefull.  My memory of classes at the Richmond Institute all those years ago was arriving late and seeming to always  get the rear view.  Hence I’m quite good at bottoms.

Layered up for January, I’d not allowed for the fact that of course the studio would be hot enough for a model to strip. Our model, in this era of health and safety, was well looked after. When I modelled at St Martin’s Art School in the 60s it was a couple of 3 bar electric fires on a stand directed at my torso.  I was so nervous a trickle of sweat would form just below my breasts and trickle down to pool in my belly button, while my feet froze.  It was very tense waiting for the pool to spill over and tickle as it made it way south.  (There may well be, in attics, pictures of a model with gritted teeth and blue feet.) I squeezed my way back through all the easels out to the loos to strip off as much as I could with decency.

When I came back in the model was sitting on the podium under the shiny blue hanging straps wearing a rather fine silk dressing  gown. I had no idea of this protocol the first time I modelled.     I’d rushed to St Martin’s from a hard day’s kicking up dust at the ballet school. “How much do you pay?” I’d asked.

“7/6 clothed or 8/9 nude.”  It was a no brainer for an impoverished student at The Brooking Tully Ballet School in Chalk Farm, living on Vesta curries and Mars Bars. I was very nervous, but I needed the money. I took a deep breath before I left the curtained off changing room in the corner of the studio, and strode out boldly, naked and ready to roll.  The teacher had a quiet word with me during the break.  I reappeared after the break wearing my black PVC Millets mac with needlecord collar, which just about covered the nether regions.  I don’t think I even owned a dressing gown.

Our model dropped her gown gracefully at a nod from Paul, climbed on top of the 3ft high podium, nimbly hooked a foot up into one of the straps, grabbed two of the other straps and settled into a pose.  I thought of orangoutangs who make a nest like this in the forest.  But this wasn’t anything like a sleeping position, it was extraordinary.  I wondered if she was also a circus performer?  With her hanging quite high above us it dawned on me that however which way she posed there would be extremely challenging foreshortening to cope with and I am no Michael Angelo.

Next door to my right was making huge bold charcoal strokes; the other side was groaning.  I started on an inhibiting piece of A3 paper with her head, so at least there was room for that. 15 minutes in, of the 40 minute pose I found that there was not enough room to include her elegantly placed foot.  This was a shame because that was the part of the pose that kind of made it.  Her toes rested very lightly on the podium anchoring her. If I chopped a theoretical foot off her leg would it fit in? Cross with myself I decided to use A1 paper next, or was it A2?  I’m that much of a novice, I wasn’t sure.

“How much longer?” asked the model. I wasn’t surprised.  Those straps looked like they cut in, even though they were about 3 inches wide. (Actually they too added another layer of complexity despite her slight frame.) I was in admiration that she could hold the pose with only the smallest stretch of a hand occasionally to release the grip. (The hand part of my drawing began to look like a bunch of bananas – a sort of time-lapse hand.)

It was a relief  for me too when she took a brief break.  I asked next door if she was a professional artist.

“Thought you were experienced…would I have been to any of the productions you’ve done?” When she lists the RSC among other places she’s worked I knew I was out of my league.

“Put your pictures up on the wall” said Paul “step back and take a look”.

“WHAT? You didn’t tell me we had to do that? What is this, the wall of shame? Please don’t make me do that.”

“It’s the only way to learn.  Here’s some masking tape.  No one else is going to look.”

I winced and pinned up my drawing as near to the floor and hidden by my  easel as I could get away with.

Another pose, this time so foreshortened that I mostly had arms and hands to deal with and the rest peeping behind like far off mountains, her face, the first mountain, hanging down this time.  In the longer tea break I had a sneaky look around the room.  There were some seriously good artists.  No one else had bananas.  I ate a piece of shortbread.  It didn’t help.  I had a chat with the model.  She told me about her other job – so that’s where I’d seen her before.  I recognised her as soon as she described the uniform.  And no, it wasn’t in the circus.

I suffered nightmares all the week following.  Naked ladies hanging in straps kept appearing swinging above me with their distortions, cackling and jeering.  I phoned my niece Delphine in Bristol.  She does life drawing.

“Wow Aunty Mary, it sounds fantastic.  I’d love to do that.” But the class was too far away for her to take it over for me.  I’m not usually a quitter.  Honestly I’m not.  That song ‘pick yourself up, dust yourself down…’ it was written for me, but the morning of class the following week I texted Paul, spoke to him and quit.  I felt really bad about it, then huge relief.  And then I remembered.

One of the last life drawing classes I did at the Richmond Institute I was interrupted.  It was a rather good drawing too, I still have it in the attic, with it’s significant date.  I used to stay overnight after the class with my old school friend Liz who lived nearby, we took class together.  That evening there was a knock on the door and her parents came in.  They had that look.  Some of you may know it, and if you do I’m sorry.  They had the terrible misfortune to be the bearers of bad news.  They asked me to come with them a moment.  They didn’t have to speak.  How did I already know? In the bleak corridor I learned that my beloved father had died suddenly: a heart attack, playing golf – it’s how he would have liked to go. He was only 63.  I was 17.

This week I transferred to Paul’s ‘basic drawing skills’ class.  There are a few excellent artists in this class as well but I didn’t mind.  I drew an ancient metal tea pot and an old Tibetan bell.  The drawings I did are not perfect, but I loved the process: the smell and shine of the metal pot, the weight of the bell, the feel of the squashy rubber.

There’s a blank page here I can’t wait to fill next week. 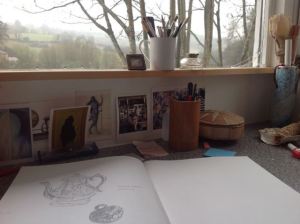