“It looks a bit posh to be our hotel” I said to Tessa.

“It is though, look, ‘Don Carlos'”. We’d arrived at San Jose in the dark, impressed by the exorbitant display of Christmas lights, and cunning ways they’d created Christmas trees, surprised by how big the city was.

“Wow”. We trundled our cases into a 1920s lobby to be greeted warmly by the receptionist in perfect English. Formalities over, he reminded us our bus would leave for Tortuguero at 6.30 in the morning. 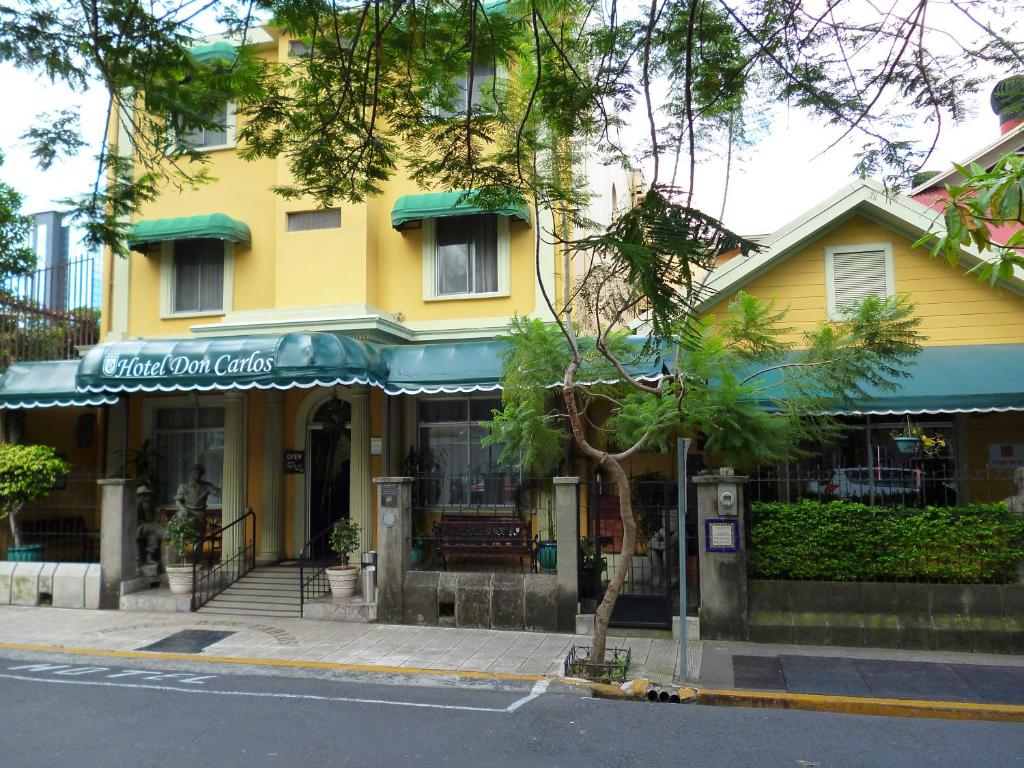 “I think it leaves at 5.30” I said. He smiled politely.  “Maybe”.  If there was one thing worrying me about our trip it was the knowledge that Tessa prefers a slow start in the morning. I know better than to call her before 9.30. I do too, but by that I mean back to bed with a cup of green tea, check Facebook, 10 minutes learning Spanish, 15 minutes yoga, 10 minutes trying to meditate, and half an hour breakfasting shouting at John Humphries on the Today programme….How on earth was I going to get her up in time?

I scrutinised the travel programme.  “He’s right, it does leave at 6.30.” Seeing an opportunity to justify 6 months struggling to learn Spanish I took myself off to the desk. Duolingo says I was 50% fluent after all.

“You are absolutely correct,” I said in hesitant Spanish “the bus does leave at 6.30” I beamed when he nodded a yes. “Was that OK ” I asked, ” my Spanish I mean?”  “Perfect” he said, his one eye twinkling.  I burst back into our room “I did it. He understood. My Spanish works.”

“How about I shower first in the morning so you can wake slowly?” Tessa readily agreed.  Too jet lagged to eat, despite our having researched several vegetarian restaurants in San Jose, we turned in at 8 o’clock. I felt guilty at passing up the opportunity to get a flavour of the city, but fell into a dizzy sleep, listening to the Archers on Tessa’s huddle.

“Everything alright?” asked Tessa when I emerged from the bathroom.

“I forgot. I put loo paper in the pan. Just had to fish it out”

“But I didn’t flush in the night after I peed.”

“Neither did I, but better that than a blocked loo when we need it.”

This was to become a familiar cry on our trip – Costa Rican plumbing is absolutely fine, as long as you remember to put the paper in the bins provided next to the loo and preferably not mistakenly reuse it like Margot in My family and Other Animals.

Rickshaw had warned us about ‘Tico time’ so our expectations were so relaxed about departure I was startled to find the lobby full of people and luggage at 6am and drivers calling out names and destinations. I hurried back to our room to warn Tessa. She’d been having a bit of a re-pack and the bed was spread with the contents of her suitcase.  “I’ll tell them you’re coming” I said and trundled my shamefully heavy suitcase stuffed with ‘might come in handys’ (50 years of travelling the world has taught me nothing) round to the lobby. 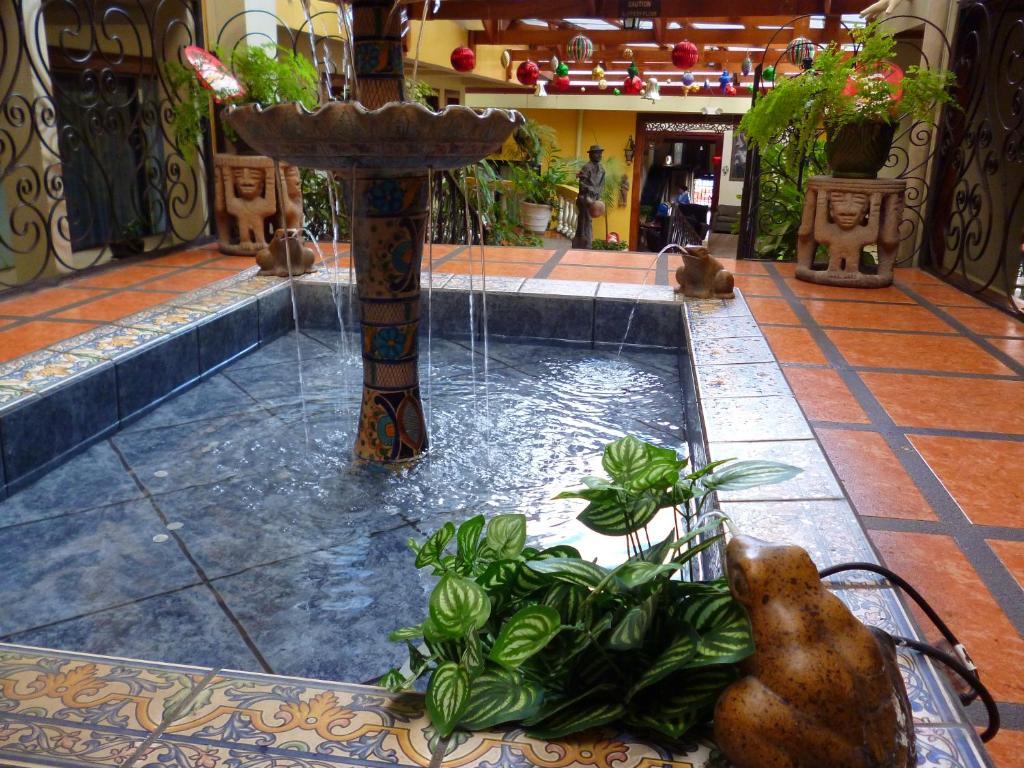 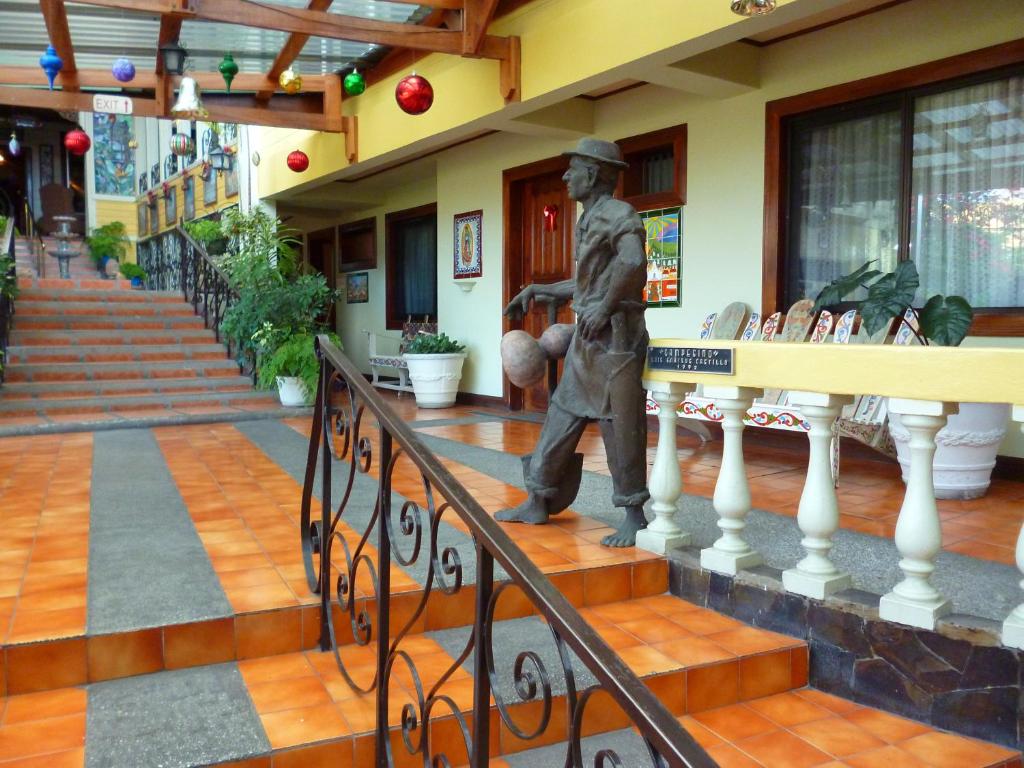 It’s never a good idea to do a long bus ride on an empty stomach, especially if you get travel sick like Tessa, so I lent her my acupressure wrist bands and we snacked on cashew nuts.  There was only coffee available, which neither of us drink. It was going to feel a long wait till the breakfast stop half way through the 2 hour bus journey.

The mini van called at a smart hotel to pick up more people, then an even smarter one where we were re-shuffled into different coaches.  I watched our cases like a hawk there being some confusion about destinations, which luggage hold, which part of the luggage hold. and which coach they went in. Stomachs grumbling, we set off into traffic in a slow trundle out of the city, tempted by distant views of mountains in cloud.”Look,” I nudged Tessa “rainforest.”

“It’s so green,” she said “just like England. We could be in the Slad Valley.”

“It’s meant to be the dry season” I said, as rain lashed the windows and condensation fogged the inside. The driver was peering through a small clear patch about the size of a football. “There’s something wrong with the air conditioning.”

“I might sue you for damages for misrepresentation of the weather” she said, shivering and fishing for her raincoat for another layer.

“Bet you’re glad you brought a fleece” I said, wiping a hole to see out of the window. No sooner had we left the suburbs than we were driving through tunnels of dripping, gushing, vine strung, creeper-clinging jungle.  It didn’t remind me of Laurie Lee country it reminded me of Tarzan. I kept my eyes peeled for Howler monkeys and toucans.

The breakfast stop, to our surprise, was at a smart cafeteria, with an enormous dining area, set up for tourists to be fed, coffee’d and redistributed into different coaches and mini vans. A kind of tropical Victoria coach station surrounded by rainforest, with breakfast buffet of rooster (fried rice and red beans), pancakes, rolls, eggs, meat and that dire stuff Lipton’s has the nerve to call tea.

Noticing a crowd gathered on the path staring up at the tree tops with binoculars I lept up, grabbed mine, and slammed straight into a glass wall.  Fortunately the damage to my nose was slight, my pride took the hit worst. But like the slap on the wrist I once got from a jelly fish in Thailand when I swam out too far, it was a good reminder to pay attention. It was a false alarm.  Someone thought they saw a sloth, a crowd quickly formed and it turned out to be vegetation.

Sloths are like that, I was to discover, looking for all the world like a bunch of moss and moving just as fast.  Moss grows happily all over their fur, fertilised by the Sloth Moth. Since the sloth only eats leaves it’s digestion is very very slow. Once a week the sloth makes a torturous journey down from the canopy to have a shit. The Sloth Moth has a charmed life laying it’s eggs in sloth dung.  Next time the sloth takes it’s weekly dump emerging moths hop on, their mucky feet adding a little je ne sais crois to the sloth’s coat which grows an excellent disguise of green moss. It’s a win win if you can bear to be a moth farm covered in dung.

The next stop was at the end of the road to Tortuguero, a village buffeted by the Caribbean on one side with a quiet lagoon on the other. It’s accesible then by an hour or so boat ride along a river and canal. We were let out at a busy dock area by the river with cafe and loos near the waiting boats. Here I had my first experience of the confusing Costa Rican currency.  I handed over $10 to the loo attendant, and got a handful of colones coins in change.  I had absolutely no idea if it was the right change. Since the notes are for thousands and millions and I didn’t understand the coins, (I am dyscalculic) I often rely on other people to do the maths.  Tessa was baffled too however.  We no doubt tipped too much or too little, were constantly shocked by the prices and wondered why no one really wanted our colones. However it was a welcome ‘comfort break’ and I’d probably have paid $10 for it anyway. Dragging our suitcases down the rough ground to the river bank we were re-sorted onto different boats depending on our Tortuguero hotels, luggage loaded onto separate boats.

There was a kerfuffle from one of the other boats. A woman had mistakenly left her suitcase at the hotel in a pile set aside for temporary storage there. Oliver, our guide, is on the case, but has to tell her bluntly the only way is back.

“It’s a boat” sighed Oliver on our Evergreen Lodge boat” don’t all sit on the same side.” The last boarders shifted over sheepishly, rocking us back level. “There are sharks and crocodiles…don’t trail your hand in the water please, and put on your life jackets. If the captain sees something interesting he will turn the boat for you to see it in turn, don’t all stand up at once.” Red Fingernails obviously didn’t listen.

We churned down a soupy brown river thickly lined on both sides with all the pot plants we’d ever known in the 60s and 70s, blown up to jungle height. It was a completely thrilling way to arrive.

The river opened up to a broad canal for the last part of the journey, rather ominously called the Penitencia, and pulled up at Evergreen Lodge dock.

“OK” said Oliver “I will give you your room numbers,some go to the right, some to the left, there is a restaurant each direction.  Your cases, if they were labeled, are already there. Do not muddle up. Eat at the restaurant on your side.” (We were only to discover why we were instructed thus just before we left.) And so we arrived at the fabulous Number 17, soaked, happy and thrilled to be so immersed in the forest, where, who knows, anything might come sliding, howling or creeping by?

2 thoughts on “Journey to top right of the skinny bit in the middle.”