Was it the effect of two hours lolling in a hot spring under the stars the previous night? Tessa and I packed slowly, retrieving our (still slightly wet) socks and knickers off the deck and getting the cleaners to show us how they do that clever towel folding thing.

“Dos huevos flip side over por favor may I take your picture?” The egg chef (there is always an egg chef in Costa Rica) sizzled in some oil.

“You all packed?” asked Tessa as I joined her with my breakfast.

“Mm, mostly” I took another slice of toast and drizzled on some honey.

“That’s not our minivan is it?” said Tessa.

“Aargh.” We scrambled to get our luggage. “Shit, where’s my passport, I had it last night?”

I can’t bear to rush. My friend Caroline is the same, leading to a tendency to arrive hours before a film starts and sitting through interminable adverts and the scary ones that remind you you forgot to lock up properly.  Tessa is much better at a flying start.  Jose the driver was patient, the missing items were found, and we joined two French pharmacists (does that sound like a song to you?) in the van. The road wound and climbed up tangled string roads towards the mountainous centre of the country rocking us side to side and dipping us up and down. Torment for Tessa, sucking another ginger sweet and concentrating hard on not being sick. But we were on our way to the mysterious cloud forest. 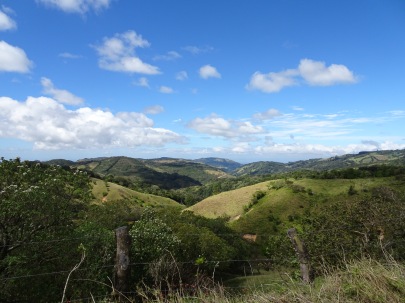 We arrived at Cala Lodge Monteverde shaken and stirred but once again thrilled with our accommodation. Built 20 years ago by its ornithologist owner the hotel is on the edge of town, surrounded by forest with pretty flowered gardens and mini nature walks. Two lovely Blue-Grey Tanagers gorged themselves, on the table by the open sided restaurant until the more dominant, cackling grackles deposed them. We hauled our suitcases up the two stories to our room which had the feel of a trees house with sunny balcony overlooking a magnificent view. 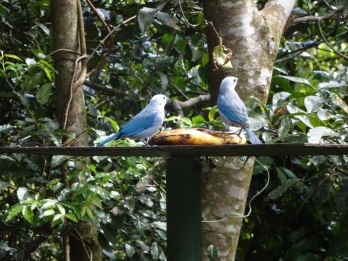 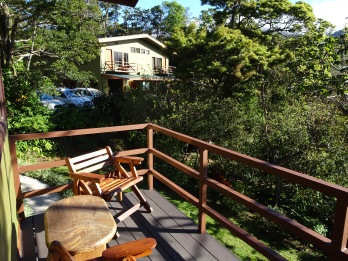 Tessa asked the receptionist if the Quaker School was anywhere nearby. A lifelong Quaker herself she is now a governor at her old school, Sidcot in Somerset. It’s part of what makes Tessa Tessa. A compassionate person, ever happy to read the best into a person. When she discovered there was a Friends school in Monteverde she emailed to see if there might be a chance to visit. It didn’t look very hopeful.  There had been recent flooding and landslip, and the address minimal. We weren’t sure how far it was, or how big Monteverde was, or if there would be time in our schedule to visit. Experiencing how advanced the Costa Ricans are in conservation and sustainability we suspected the strong Quaker presence might have had a great deal to do with it.  They even got rid of their army.  On December 1st 1948 President José Figueres Ferrer gave them their final marching orders. In a ceremony in the Cuartel Bellavista, Figueres broke a wall with a mallet symbolizing an end to Costa Rica’s military spirit. https://en.wikipedia.org/wiki/Public_Forces_of_Costa_Rica

“One hour walk up the road” said the receptionist “or you could take a bus or a taxi”.

“And Curi Cancha? Is that nearby?”

“It’s right by the school” said the receptionist “you can see it from your balcony.”

Now Curi Cancha was my number one wish. I’d spotted a short paragraph about it in the Lonely Planet Guide described it thus: “Bordering Monteverde but without the crowds, this lovely private reserve on the banks of the Rio Cuecha is popular among birders…with a hummingbird garden and view of the continental divide.” I’d managed to arrange a private visit with Darlene from Monteverde Travel, after a long, and sometimes confusing, exchange of emails, for just the two of us with our own guide. It wasn’t cheap (around £46 each) but understanding that there was a chance of seeing abundant wildlife there I couldn’t bear to miss it. It took some juggling but we’d managed to wangle it into the itinerary. It wasn’t ideal to go in an afternoon, but it was worth a try as that was our only chance. I’m not exactly a birder (memories of freezing afternoons in February on the edge of sewage farms on the outskirts of London with my birder first husband had done for that years ago) but it is creeping up on me.

Discarding boots for sandals we slathered on sun cream and set out along the dusty road to look for the school, hardly able to contain excitement at our luck.

“Look at that, a little pastry shop.” Two women in floaty skirts and Birkenstocks passed us “just like Stroud,” I said “we’ve even got the right footwear.” Further along we saw  large wooden round house that looked like it had a Rudolph Steiner stamp. A couple of dread-locked hippies carrying yoga mats opened the door and went in.  Further up the road we came across where the landslip had scoured it’s way down the hillside taking half a row of houses with it. It was a long hot slog, broken with a visit to the women’s co-op shop, initiated by the school to help local women earn money from creative projects. The receptionist said everyone liked the school, and she often went there just to sit quietly.  We loaded up on more gifts, very happy to support the project.

Tessa and Headmistress of the Friends School Monteverde

We found the school eventually, passing a sign to Curi Cancha just before it. While I sat quietly in the meeting room Tessa found the headmistress and had a rewarding hour swapping information and hopefully sowing the seeds for a future link between Monteverde Friends school and Sidcot. I joined them in a tour of the classrooms, thinking how lucky some kids were to have access to this sort of education only wishing it was available to all kids.  On the way back we stopped off at Jiminez’s cafe for a claggy guava jam bun with fake cream and chocolate on top. I had no idea Tessa had such a sweet tooth.

The receptionist at Cala had persuaded us to take a night hike. Tiptoeing around the forest in groups of ten or so we shone our torches into the forest searching for animals, in the undergrowth and up in the trees. Well, most of us did. I for one was very relieved when a woman ticked off her American husband for speaking too loudly and shining his torch in other people’s faces. We drew the short straw with our guide Maurice, who seemed only to find things previous guides had scouted out, but I suppose everyone has to start somewhere.

Just after we’d slithered down a muddy bank one by one to cautiously admire a fluorescent green side-striped pit viper, Maurice was alerted to a sleeping rainbow toucan, it’s improbable beak tucked under it’s wing, high up in a tree.  To be honest it was  pretty much a blob with a bit of yellow and orange showing, but a toucan nevertheless.  I could finally say I’d been to Costa Rica and seen a toucan.

Maurice moved us on along. “Look up there” he directed his red pointer light at a fine branch with a tiny nest danging precariously from the end. It had what looked at first like a sharp needle sticking out of the top. “Humming bird sleeping” he said “when there is no sunlight they are just grey, the colour only comes from the light, it’s a grey bird.”  That was quite a thought. I found a Jay’s feather once, and was astonished to learn the same thing about the tiny blue and white striped feathers on its wings that are so distinctive. There was the grey bird blending in nicely, snoozing away but, because of the delicate branch, unlikely to be disturbed by that viper. Nearby two very spotted white chested thrushes cuddled up closer when our searchlights found them.

As the hike ended, and the different groups merged one of the guides spotted a sloth. A sloth in action. At a tortuous pace it was picking its way down to the ground from its tree top home for its weekly shit.  Fortunately for us it was almost down – or we’d have been there all night waiting. Poor creature.  Possibly it was not thrilled to have such a large audience for what most of us prefer to be a private act. (There was more on the sloth in journey to the top right of )

Dripping wet, we stopped by for dinner at Don Lucia restaurant.  Their aubergine parmigiana, melty soft, was as perfect as ever I’ve tasted. We walked back to the lodge well fed, fairly content with what we’d seen (but not with the $25 fee we each paid for the hike) and on the way back I narrowly escaped being eaten by a crocodile.